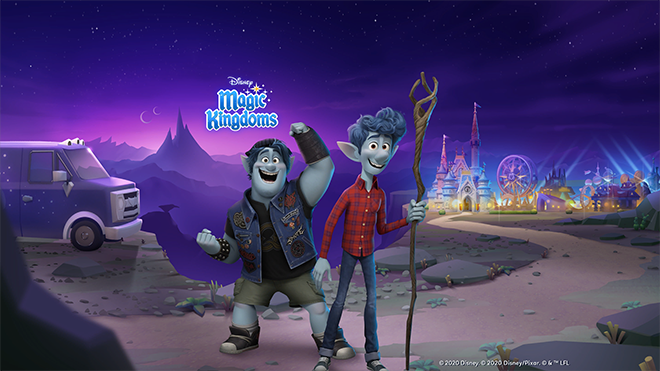 Onward Event Update
The magic is out there…

THE MAGIC IS OUT THERE...

...You just have to know where to look! Disney and Pixar's Onward comes to theaters this March, and we're ready for it! A grand and glorious quest is coming to Disney Magic Kingdoms – Ian, Barley, Laurel, The Manticore, and more characters from the film will be available during this time-limited event!

It's game night at the Lightfoot House! Following the events of the movie, Barley has coordinated only the most epic Quests of Yore game for the family to play. As they work on building their skills as fantasy versions of themselves, Ian finds his luck lacking as he gets his character into one mishap after another...

Triton's coronation anniversary date is approaching and Ariel is nowhere to be found. Sebastian tasks himself with locating her and making sure she's ready, while lo and behold, Ursula has plans of her own to commemorate the occasion... New The Little Mermaid quests are waiting for you!

- The Princess and the Frog Collection

The following Concessions have been added to the Concession Chest:

The following Concessions have been removed from the Concession Chest:

The following Decorations have been added to the Decoration Chest:

The following Decorations have been removed from the Decoration Chest:

Language Support
Removed support and translation for the following languages

4
A
B
C
D
E
G
I
L
M
O
P
Q
R
S
T
U
Next
Retrieved from "https://disneymagickingdomswiki.fandom.com/wiki/Category:Update_39?oldid=139613"
Community content is available under CC-BY-SA unless otherwise noted.