You can find Enchanted Chests hidden throughout your Kingdom. The train also delivers a chest once a day. Even completing quests and activities can reward you with a chest. There are always Enchanted Chests to discover every day!

Cursed chests can have their curse dispelled at the Treasure Bank. Move the cursed chest from its storage onto an open platform to dispel its curse. When the curse is dispelled you can then open the chest to get a reward. Some rewards, such as Magic and Experience, are collected the moment you open the chest! Rewards such as Attractions, Concessions, Decorations, and Characters are moved to the Shop and Welcome screens.

As of Update 31, enchanted chests are no longer cursed, so therefore, players can open the chest instantly. As of Update 34, the Treasure Bank is removed, so players who bought chest pedestals and storage have their gems and magic reimbursed. Players now have direct access to one bronze chest every 24 hours, and a second one for watching an ad.

25% Sale (Legendary Holiday)
Add a photo to this gallery

40% Sale (Boxing Week Sales)
Add a photo to this gallery

50% Sale (This Is Halloween Event Sale)

50% Sale (Boxing Day Sale)
Add a photo to this gallery 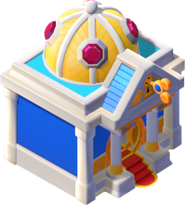 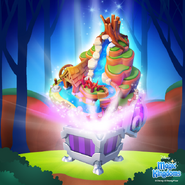 The Tower Challenge (Beauty and the Beast) Chest Promotion

Into the Mist Event 2019 Chests Promotion

A Galaxy Far, Far Away.... Event 2019 Chests Promotion
Add a photo to this gallery
Retrieved from "https://disneymagickingdomswiki.fandom.com/wiki/Enchanted_Chests?oldid=115544"
Community content is available under CC-BY-SA unless otherwise noted.