Kylo Ren is a limited-time character released with Star Wars Event Update on 17th December 2019, and is a part of the Star Wars character collection.

Ben Solo, formerly known by his dark side persona Kylo Ren, is a fictional character in the Star Wars franchise. Introduced in the 2015 film Star Wars: The Force Awakens, he is portrayed by Adam Driver. Kylo Ren was the chosen name of Ben Solo, the only son of original Star Wars trilogy characters Han Solo and Leia Organa. Kylo Ren is also the former master of the Knights of Ren, as well as a commander and later the Supreme Leader of the First Order, an organization spawned from the former Galactic Empire. 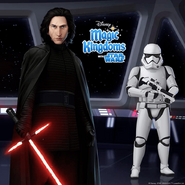 (Max level)
Add a photo to this gallery
Retrieved from "https://disneymagickingdomswiki.fandom.com/wiki/Kylo_Ren?oldid=208275"
Community content is available under CC-BY-SA unless otherwise noted.