The Sword in the Stone (

Merlin is a character released with the Beauty and the Beast Event, Chip and Dale Update on 8th March 2017, and is a part of The Sword in the Stone character collection.

Merlin is a powerful wizard and the deuteragonist in Disney's 1963 animated film, The Sword in the Stone. Merlin is the wizard master and friend of 12-year-old orphan Arthur, a.k.a. Wart. Merlin is also the magical rival of Madam Mim and has a pet owl named Archimedes.

Blow me to Bermuda! This IS a surprise! 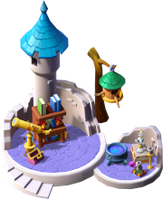 Find a Chest FAQ
Add a photo to this gallery
Retrieved from "https://disneymagickingdomswiki.fandom.com/wiki/Merlin?oldid=206007"
Community content is available under CC-BY-SA unless otherwise noted.