Prince Charming's Regal Carrousel is an attraction released with Cinderella, Enchanted Chests Update on 29th July 2016. It is unlocked when Prince Charming is Level 3.

The backstory behind it indicates that Prince Charming initially constructed the carrousel as a tool to help him practice jousting. However, when the rest of the kingdom expressed interest in the tool as a fun ride, Charming constructed another carrousel closer to his castle so everyone can have a good time on it. 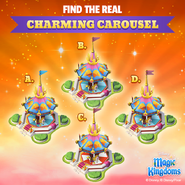 Find the real Charming Carrousel
Add a photo to this gallery
Retrieved from "https://disneymagickingdomswiki.fandom.com/wiki/Prince_Charming%27s_Regal_Carrousel?oldid=199833"
Community content is available under CC-BY-SA unless otherwise noted.