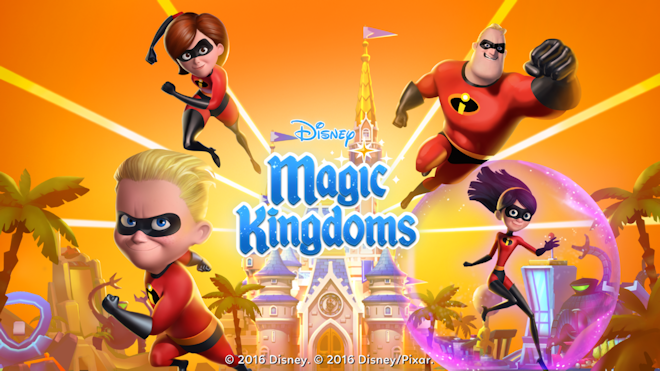 The Incredibles Event 2016 is the first major event of Disney Magic Kingdoms. It started on 16th June 2016 and ended on 14th July 2016. With this event, a new permanent change was made, confirmation of Gem spending.

The event starts with the short quest Sounds Like Trouble. Complete quests and defeat Syndrome's robots to progress in the event. Purchasing Frozone unlocks his questline, A Polar P.S.A..

This event is similar to the Dark Magic Mini Event and the Clean Sweep Mini Event, where NPCs have to be tapped, in this case Claw Bots (

Any Incredibles Currency a player had remaining was converted to Gems (40 max.) at the end of the event.

250 Gems by Completing Quests, Leveling Up Incredibles Characters and playing the Striking Gold Mini Events during the event.

Let's show Syndrome who's boss by getting together as a community. The more supporters we gather, bigger the rewards, including a Live Stream with the developers, 100 Gem Sweepstakes, and Mysteriously Chilly Character & Deco Sweepstakes!

Dash has been unlocked!

Violet has been unlocked!

The Omnidroid has appeared!

Event has come to an end...

Summary
Add a photo to this gallery
Retrieved from "https://disneymagickingdomswiki.fandom.com/wiki/The_Incredibles_Event_2016?oldid=114858"
Community content is available under CC-BY-SA unless otherwise noted.